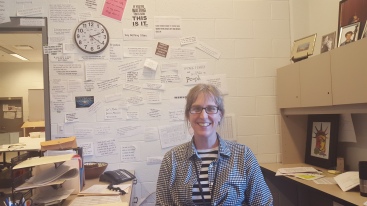 Hello everyone! The end of the semester is upon us, but we still have one more person we need to talk about at the Clinton Library! Christine Mouw, or Chris, is the Curator of the Clinton Library and the head of over 100,000 objects. One of her greatest goals is organizing this vast collection and de-accessioning the objects into a working order, not only for her but to help with exhibit set up and relevancy for patrons who visit the library.

Chris started with a BA in history from Calvin College, and after her adviser mentioned she could use her degree in museums, she decided to check it out by working for a summer at Mackinac Island State Park in Michigan, painting numbers on Minié balls and cannon balls from the War of 1812. Falling in love with historical objects (and realizing you can do more with a history degree than teach) she decided to attend the University of Delaware and received her MA in History with a certificate in Museum Studies.

From there, Chris decided to expand upon her knowledge of museums, and spent a summer at Colonial Williamsburg before gaining her first long term job at the Philadelphia Maritime Museum (now called the Independent Seaport Museum), where she worked for two years as a curatorial assistant. One of her best memories is working on her first exhibit at the Maritime Museum, called “Exploration of Delaware Valley” and the “Wheel of Death”, where patrons can learn about all the various ways that you can die when you are at sea. How educationally exciting!

After that, Chris gained employment in the federal government for the 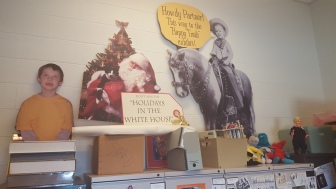 first time as a museum tech at the Herbert Hoover Presidential Library. She worked her way up to become the Exhibit Specialists, and then transferred to the Clinton Library as a Supervisory Curator, where she has been for almost eleven years! One of the most intriguing exhibits she worked on (so far) at the Clinton Library was the exhibit titled “The Long Struggle – African American Civil Rights and Presidents” where the museum explained what presidents did, or didn’t do, in the Civil Rights Movement. The library even had the original Emancipation Proclamation and worked with Central High School National Historic Site since it was the 50th Anniversary of the Little Rock Nine entering Central High School!

It’s been so wonderful working with these great people over the last year and a half, and I can’t wait to see what the future holds for them. I have learned so much in such a short amount of time, and my career has definitely been defined based on these experiences. Thank you Chris, Jennifer, Joseph, Kit, and Stephanie for all of your help and dedication!

← Day in the Life – Jennifer Wisniewski, Exhibit Specialist
Graduation and Thank You! →

One Comment on “Day in the Life: Christine Mouw, Curator”