Welcome back! This post will focus on our next adventure: The beautiful, historic city of Utrecht! After our reunion with old friends who live in Germany, all four of us headed to Utrecht for a long weekend. Utrecht, like Amsterdam, has a very lively, long history that stretches back to the High Middle Ages, and has been the religious center of the Netherlands since the 8th century. This is evident with the Dom Tower – an

impressive structure that is one of the highlights of visiting the city.

The Dom Tower is the tallest church tower in the Netherlands at 112.5 m (368 ft) high, and was part of the Cathedral of Saint Martin. Built between 1321 and 1382, the design of the building is in the Gothic-style created by John of Hainaut. One of the coolest things about the Dom Tower and the Dom Square where it resides is the history literally below your feet! Roman fortifications were built around 48 AD to hold about 500 Roman soldiers. This traiectum or Roman fort, saw the replacement of the original wooden walls with sturdier tuff stone walls. Around 275, when the Romans could no longer maintain the northern border, Utrecht was abandoned. You can still see these Roman ‘ruins’ by going below the tower with a tour guide, which is exactly what we did. Below, you not only learn about the Romans you also learn about the extensive history of the city.

Fast forward a few centuries to 695 when Willibrord, a Northumbrian missionary saint, was sent to Utrecht to preach and establish churches – including the monastery at Utrecht. Willibrord is considered the first Bishop of Utrecht. Besides being a very holy

man (he was made a saint quickly after his death on November 7, 739), Willibrord started a religious revival in Utrecht.

In 1321, the Dom Church’s construction started. This important structure was used to show the power of the church in Utrecht, and even survived a tornado in 1674! Part of the cathedral was damaged but overall the Dom Tower remained. Utrecht’s importance as the center of Christianity continued throughout her history, into 1522 when Adriaan Florenszoon Boeyens was elected to pope.  While today the walls of the fortified town have become obsolete, you can still see the ancient outlines preserved by history. While walking through the city, through the stone where the outlines of the wall use to rise is a green light that is filtered up from below, almost like a laser wall. You can only see it when you walk over it, but it is there to highlight the old walls while not disturbing the newer buildings and renovations of today. Pretty neat!

Utrecht has a history that is filled with large gaps and, while it does answer a lot of historical questions, it seems to ask more and more as you learn! I find

that history is amazing because of this concept. We should always be curious about history and try to find the who, what, when, where, and why associated with all historical events. We can’t always answer these questions because historical records are destroyed through age or conflict, are moved, or are never written. Utrecht has such a long, extensive history that it is hard to put the pieces of the puzzle together – but that’s also the fun! (Just remember – to help your future historians out, try and keep a good journal!)

History is great, but it was nice just walking down the street and…navigating the waterways with out own privately rented boat! What great excitement, to actually pilot a small boat through the extensive canal system of Utrecht?! What I found really cool is the system of wharves that accompany the canals. A wharf is an area where a ship may be moored (tied to the shore/dock) to load or unload. When walking on the brick or stone walkways above the canals, you are looking right at the store or home entrance. Below is the cellars – which are right at eye level when in the canal. Tying up to the wharf allows you access to these “underground” entrances. The cool thing about Utrecht is that there are staircases leading to these wharves, or you can access them via food. This is much different than Amsterdam and I think makes Utrecht more unique! 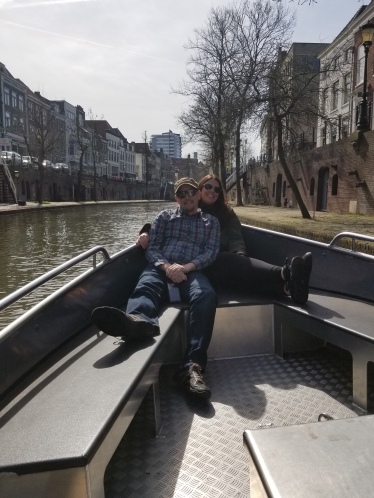 few times. All in all, it was a very relaxing few days in a new city. We tried croquette (kroketten), which is a small bread-crumbed fried food usually shaped as a small ball (bitterballen!) or almost like a egg-roll. It is really good! We were even able to take in a live show – a cover band that was preforming in the evening. With our hotel only a short walk away from the city center, we were able to walk to everything and take our time going through this amazing city!

My next post will focus a little more on both the smaller German and Dutch places we visited along our trip before heading out to Croatia. The Netherlands is a gorgeous country with very happy people who are uniquely “Dutch”. In all my travels, it’s been nice to see what makes a certain person “who they are”, and a lot of the times it boils down to where they are from or where they grew up – or their nationality. The Dutch are very kind, loving, bicycle crazy (!) individuals who are wonderful in all aspects – just like the majority of everyone else. Read through this article to see other ways that Utrecht is enjoyed by many, and hopefully these blog posts are inspiring you to make your next trip include the Netherlands!

#FindYourPark - Base camp for the Traveling Talleys