Hello all! This blog post will continue with the #TravelingTalleys in Europe and showcases the wonderful, smaller cities that were visited. I won’t put any time reference in because we visited them very sporadically and it depended on when we were in the Netherlands or Germany with our friends. Enjoy! 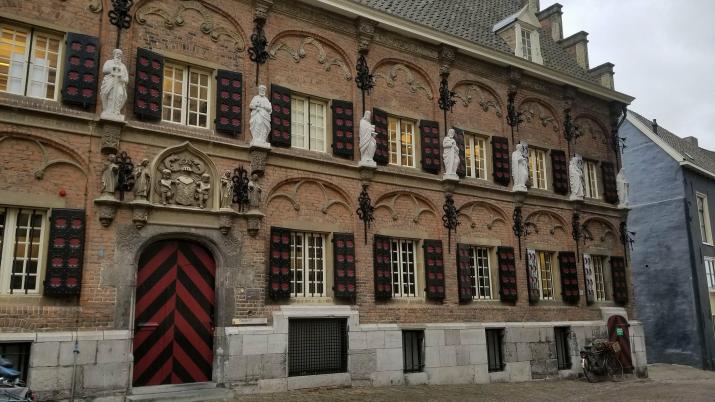 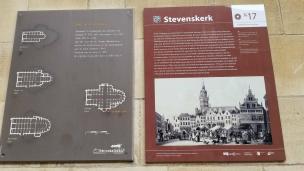 Nijmegen is a city  in the Netherlands near the German border on the Waal river. It is the oldest city in the Netherlands, celebrating 2,000 years of existence in 2005! We spent the majority of the time sitting and drinking warm beverages inside a cafe because it was very windy and cold outside. We sat in a cafe near the Stevenskerk. This church was consecrated by Albert Magnus, the Bishop of Cologne, in 1273. Extensive construction took place in the 15th century and stopped in 1650, though it was still incomplete. Damage was sustained when Nijmegen was bombed during World War II but was fully renovated after the war, and opened in 1969. Nijmegen is truly a beautiful area to visit! 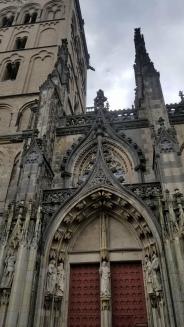 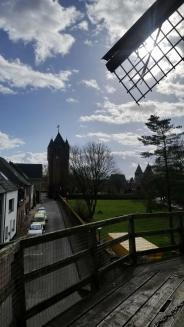 Xanten is in the state of North Rhine-Westphalia, Germany. It is located in the district of Wesel. While there we walked around the town, got ice-cream, and saw the sights! We even had lunch with more friends and their growing family! 🙂 The Kriemhildmühle is a historic windmill and only mill in the Lower Rhine. The mill was actually built as part of the city’s fortification at the end of the 14th century. In 1804 a merchant named Gerhard Schleß purchased the tower and converted it into an oil mill with a 19.3 m (63.3 ft) high windmill. After it was sold to a miller, it became a flour mill. It is open daily for visitors to walk through, see the city at a great view, and take in some cool history! We also visited the Xanten Cathedral. Construction of the cathedral lasted 281 years, starting in 1263 and finishing in 1544. Both of these places were really cool to see!

A quick lunch spot in the Netherlands showed us a beautiful beach and great views even though the weather wasn’t at its best. Strandclub Witsand, the restaurant we ate at during our quick visit, was delicious! We didn’t sit outside but we did have a pretty good view of the beach where the restaurant was  facing. Located in Noordwijk, a smaller coastal town that reminded me immediately of Cocoa Beach, a local beach near where I grew up. This was also the first place that we tried bitterballen. Specifically located in Noordwijk aan Zee, the area was originally founded in 1200 as a fishing village, and remained the areas primary business until recent history. Today, it is a popular resort town. And I can definitely understand why! It’s a gorgeous area, even when cloudy. 🙂

Kleve is a small town in the Lower Rhine region of Germany near the border to the Netherlands and the Rhine river. Besides quaint, brick walkways and cute shops along streets you can stroll on all day, the area also holds a castle called Swan Castle! Schwanenberg (Swan Castle) resides on a steep hill and has a massive, 55m (180 ft) tower. You can walk into the center of the square at the top of the hill and see the castle in person. The surrounding area grew mainly starting in 1242 when Kleve received city rights. Like many of the smaller towns close to the border of two major countries, there are obvious influences from both the German and the Dutch culture throughout the city. Though it still is obviously German it is really cool going between two different countries and seeing the differences and similarities!

One of our favorite places we visited near where our friends live was ‘s-Heerenberg, located in the Netherlands close to the German border. (Noticing a theme on the locations?) One of the stories we learned about the city involved a witch trial in the early 1600s for a condemned woman, Mechteld ten Ham.  After she failed her trail, she was found guilty of sorcery and burned alive at the stake. She was held as prisoner nearby the Castle Huis Bergh until her death. We were able to view the area where she was held prisoner, and her house –  which today has an informational plaque and statue about the accusation she was a witch and the remainder of her life. The Castle Huis Bergh was a very interesting place to tour. We were able to view the grounds and the inside living quarters, and joined a tour to take us to the top for a grand view of the area. The castle history dates back to the 13th century and was previously owned by the counts den Bergh. By the early 1900s, the castle has undergone damage during the Dutch Revolt and even burned down in 1735. In 1912, the property and all belongings were sold to Jan Herman van Heek, who restored the buildings. We had a great time having a drink and enjoying the view in the same area, and walk around the park with our friends!

Our German and Dutch adventure comes to a close. We were very happy to spend the time with friends whom we only see on average every four years. This time, it was our turn. We were coming back after 8 years! But we knew we wanted to take time to try a new adventure and travel to a different country. After a few conversations, it was decided that Croatia was our next trip. We had tried to go to Croatia when we visited last time, but the train was over 15 hours just to travel a short distance. It wasn’t worth it. This time, we flew Ryanair (totally recommend!) and saved time and money flying from the nearby airport in Germany to Zadar, Croatia. We had Airbnbs ready, information on how to use the train and where to walk to get there, and a fair currency exchange. Next blog post will be about our time in Zadar!