#TravelingTalleys and the Lloyds visit the National Aquarium!

While my parents were visiting  during the July 4th holiday we were able to do something that had been on our list of things to do for the past two years: visit the National Aquarium! We started the day early as one of the first visitors when the building opened which is a definite recommendation if you plan to visit, especially on a Saturday. We did the same thing with the Historic Ships mentioned in previous posts – plan accordingly!

The National Aquarium is the largest tourist attraction in the state of Maryland with over 1.5 million visitors annually. The Aquarium was originally supported by the residents of the City of Baltimore when they voted for a bond loan referendum for building the facility in 1976. Supported by Mayor William Schaefer and Commissioner of the city Department of Housing and Community Development Robert Embry, groundbreaking began in August, 1978. The United States Congress designated the facility a national aquarium in 1979.

One of the coolest exhibits is the tropical rain forest at the top deck. We were able to see sloths napping in the canopy, and various birds – including the loudest bird in the world! There is one large, 265,000 gallon habitat called Blacktip Reef in the middle of the 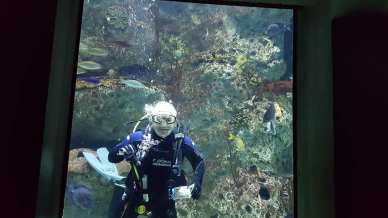 building that can be viewed as you access the various exhibits and levels. There are around 70 species that co-habitat, including a 500 pound green sea turtle named Calypso! She was rescued off the shore of Long Island in 2000 and had her left front flipper amputated to save her life as it had become infected. Another awesome exhibit is Shark Alley, which includes nurse sharks and sandbar sharks in a 225,000 gallon ring shaped exhibit. It is really neat as it gets darker and darker when you walk down the ramp, and the music is on point!

The staff and volunteers obviously love working there as we waved at multiple divers who were feeding the fish and interacting with visitors. I learned a ton with each questions I asked, and really enjoyed seeing Blacktip Reef from various angles as we went higher up in the building. There is a lot of informational exhibits but even more opportunities for up close observation. Attempting to find the various reptiles hidden in the landscape is so much fun, and watching memorizing fish and animals co-exist is definitely worth the time.

Hopefully you find time in your visit to Baltimore to view the National Aquarium for a few hours. It’s in the heart of the Inner Harbor so there is so much to do there already, but this is a must see. Until next time!